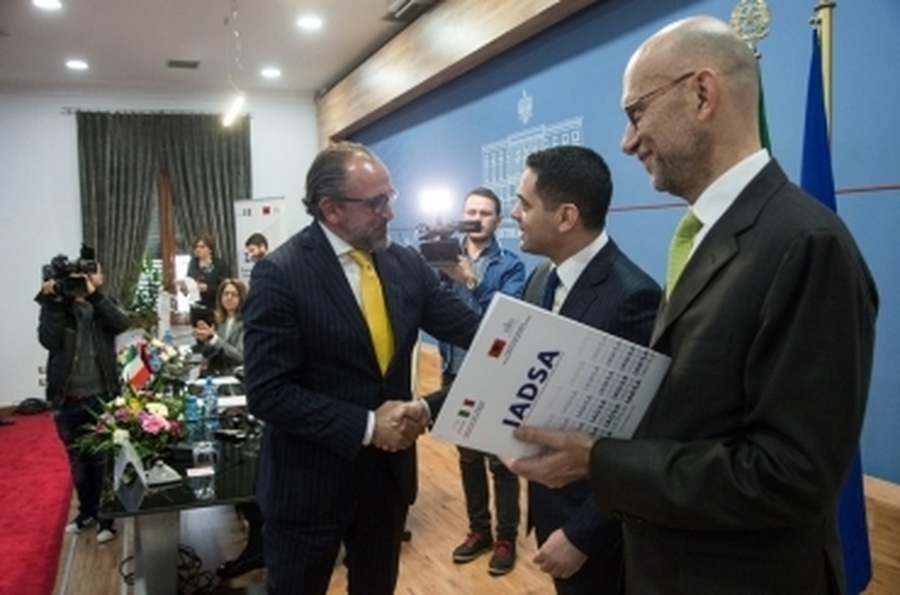 On March 10th in Tirana, Ambassador Alberto Cutillo and the Albanian Minister of Finance, Arben Ahmetaj, awarded the funding of 15 new projects that obtained the highest score at the end of the joint evaluation process of the project proposals put forward by the Albanian municipalities in answer to the fifth call of the Italian-Albanian Debt Conversion Program (IADSA). Present mayors assigned funding for selected projects, together with representatives of their partners, Italians and Albanians. The AICS Director of the Tirana office, dott. Nino Merola.

Deep appreciation was expressed by the Albanian Minister of Finance, Arben Ahmetaj, for the IADSA Program, for the fruitful collaboration between the parties and for the support given by Italy to Albania. In his speech, Ambassador Cutillo defined the Debt Conversion Program as one of the most advanced financial instruments of cooperation, which proved effective in supporting the implementation of the Albanian government's social policies at both central and local levels, contributing to create synergies between Albanian and Italian subjects, between public institutions and the different segments of civil society. With this fifth call the financial endowment of the first phase of the Conversion Program is totally committed and, therefore, the Ambassador thanked all the institutions involved in the Program, above all the more than 40 public institutions of the Country that hold the projects funded by the IADSA; in particular, the 32 Albanian municipalities that have already benefited or benefit from IADSA contributions and which make up more than half of the Albanian municipalities confirming Italy's commitment alongside Albania in the broader framework of the accession process to the European Union.

The 15 selected projects will be financed out of the funds for debt conversion for a total of 4.8 million euros and will be added to the 42 projects already funded for a total of 15.7 million euros, of which 20 projects are have already been successfully completed. These new 15 projects are aimed at improving school infrastructures, also helping to eliminate architectural barriers that prevent access to children and girls with disabilities; to create new spaces for young people to promote socialization and to allow boys and girls to express their potential and creativity; a project will allow the strengthening of basic health services in a poorly-served municipality in northern Albania; a project presented by the Municipality of Tirana is aimed at guaranteeing homelessness; while two other projects respectively presented by the Municipality of Valona and that of Himara are aimed at promoting responsible and sustainable tourism to foster new jobs in the south of the country and, finally, a project presented by the Municipality of Korca will allow the creation of an agri-food hub in a region with a strong agricultural vocation, but where it is mainly managed at the family level.